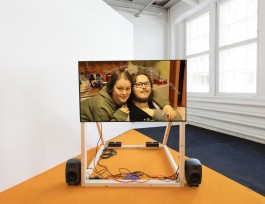 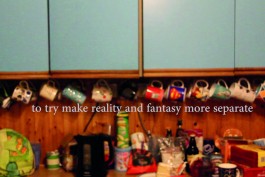 I have a brother, he is two years younger than me, which makes him almost 25 at the time of writing. He is autistic, somewhere in the middle of the spectrum I’d say, if that makes any sense. He’s quite sociable, but he cannot read or write. He usually seems happy, but is also prone to strong bouts of anxiety, related to death and/or abandonment.

I’ve been trying to make this film for four years. It’s probably a piece that can’t ever be finished. Maybe that’s ok. Originally I thought this was a work that considered sibling relationships and how special needs may exacerbate these very normal tensions. But I was unable to say what I wanted to, and so the work wasn’t very good.

People assume I’m an only child is about the problems of making work of this nature; not only personal work, but work in which a power imbalance is directly manifest. By presenting the relationship between my brother and I the work seeks to explore consent and culpability, and the responsibility to ones subject in the wider context of art making. It asks how to be careful, how to be gentle, yet how to still be honest, how to strike a balance, and then how to still make the thing.