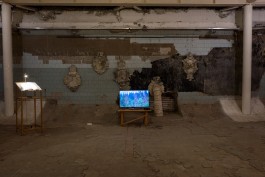 Rain Poem was written and shot simultaneously during a storm at Mustarinda. At the moment of writing, I felt I was really getting at something; some honest, teenage truth. But on reflection, it includes ideas about my youth which are untrue or exaggerated; deferred experiences, the neighbours’ children, American television, written into my own past, wishful thinking. I read somewhere that sentimentality is an emotion you’ve seen before. In the text multiple time periods overlap, overwrite. The camera wanders, it loses the thread, it’s grainy like how memories are often made to look. But the grain is just the rain, the thing that ties these moments.

Exhibited at Give me what I want and then leave me alone, Project Room, Helsinki and LOVELESSNESS, Petrikirche, St. Petersburg. Screened at Kaupunki Kirjasto, Turku